Click on the "Add" button, checkout and use your Audio Plugin Deal code in the shopping cart. This will allow you to download the instruments for free. Choose the payment option "Free Checkout" when checking out! 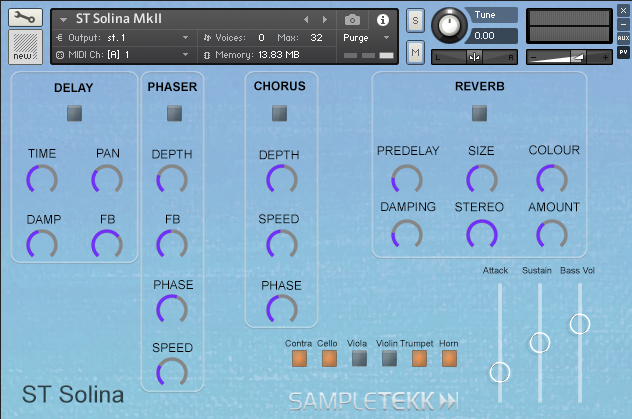 This is the classic ARP String Synthesizer of the late 70's faithfully captured in all its analog warmth. Every note of every Factory Preset is sampled! It is like buying the actual synth in perfect working order for an unbelievably low price. Now you can add the authentic sounds of this much sought after synth. Now in Kontakt format that gives access to all original controls plus effects

It's a small electric piano that has a rather weird way of producing sounds!
The plastic of the key is mounted on a pivoting metal bar, onto the back of which a slightly sticky silicone rubber pad is slid. The pad sits on top of, and in contact with, a flat metal reed (not a tine) and presses it down so that the reed is under a bending strain. When you depress the key, the pad lifts, not only allowing the reed to spring straight, but also pulling it upward for a fraction of an inch before the adhesion is broken.
Kind of cool!
Originally it didn’t come with a sustainpedal, but the sampled verison has! If you are a Pianet T purist, simply hide your sustain pedal in a dark place! 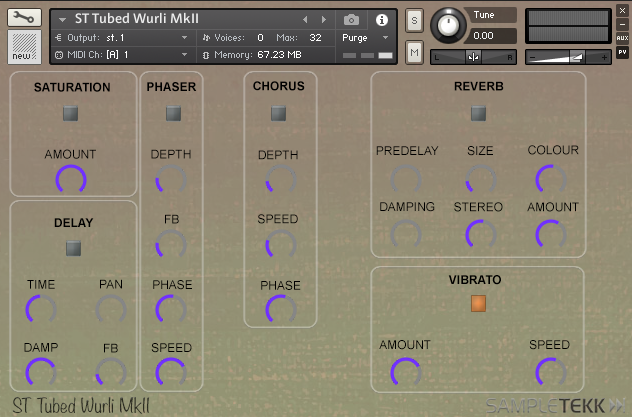 The Wurlitzer 200A™ electric piano has been used on countless recordings and its distinct sound has been the signature for many, many artists. The SampleTekk version of the Wurlitzer 200A™ has been recorded using vacuum tube amplifiers, in this case, a Fender Twin™ amplifier. We have preferred this method to the more conventional one of simply lining the piano, because we believe that this gives the piano the roughness and growl needed to capture the true sound of the instrument. The Piano has been sampled in thirds, that is, no notes are transposed more then a semi note, (note: some notes might be recorded outside this concept since they sounded better…). Each recorded note has 16 velocity samples plus 16 release samples giving you incredible control over dynamics and tone and provides you with super-realistic playing. All samples are 24 bit, no loops.

GUI available for the Kontakt 5 version included in the package

When recording a Rhodes piano, nearly all, (or all?), instruments that has been recorded for a sampled instrument are lined. That means that you take the signal from the instrument, and feed it directly to the recording device.
This means that you will get a very clean, bright signal. And that is, in itself, a good thing!

This is exactly why I choose not to do so!

When Fender tuned and set up the Rhodes pianos on the factory, they used a Fender Twin as a preference amplifier. That was the way the where intended to sound.
Personally, I'm used to feed my eardrums with the Rhodes/Fender Twin sound since my good friend Tomas Sunmo (remember Sunes L100???) used to run his Rhodes through a Twin and we played together for a long time. (Tomas have now moved to southern Sweden and as a result, we don't play together and his children has a weird accent..)
And since the piano used for the session was Sunes, well, it just had to be a Twin!
The instrument was bought by Tomas back in the seventies, around -75 I think, and it's been in his care since then.
Tomas always took extremely good care of his instrument, (he nearly punched me one time, when he found one of my plectrums inside the piano. That was a long time ago and we are both older and wiser), even so, the Rhodes was tuned and fixed by Fredrik Adler, Sweden's top Rhodes tech!
The amp wasn't set up to produce distortion, just to add character and flavour, and it did!
This Rhodes doesn't sound like a lined Rhodes, it sounds like a Rhodes played through a Fender Twin - The way it was supposed to.

The Mk I Seventy-Three has no less then 16 different velocity samples/note and this gives you the dynamic response that's not found on any other sampled Rhodes. Add to this 16 matching release samples and you'll have 32 samples/note!

You'll need minimum Kontakt 4 full version. It will open in the free player, or with a player that came with another Kontakt instrument, but only in a demo mode. That means that there's a time limitation/session.

Included are also EXS24 and HALion programs. They don't have the GUI that the Kontakt version has, but uses exactly the same samples.


Your Review: Note: HTML is not translated!