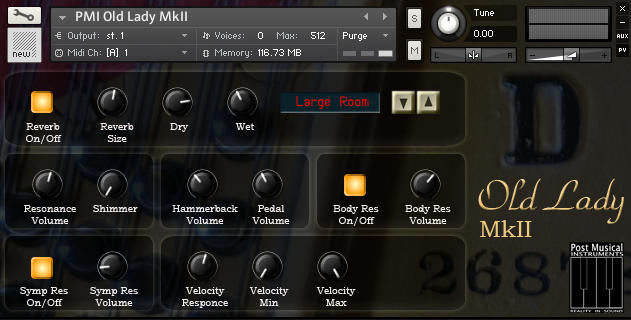 In the PMI Old Lady history and future meet each other and the result is stunning! In 1876 Thedore Steinway achieved to present the world with the first concert grand piano that had a duplex scale, bent rim case, cupola iron frame and a special action to lift enlarged hammers. When he died in 1889, he left behind a piano design that could hardly be improved upon. The Steinway D is called THE grand piano by both musicians and composers. The 1920’s models are by many considered to be absolutely superior to any piano produced after that date.

I discovered this Old Lady in a lovely little village in Kent (UK). The owner of this unique musical instrument has a collection of some 20 grand pianos in several sizes but chooses The Old Lady to stand in his living room. The owner achieved to install a very high-tech mechanism in the piano, designed by Wayne Stahnke that operates the piano keys and pedals with more then 1000 steps accuracy and is controlled by a computer system. This allowed me to capture each velocity layer of this perfect instrument with unequalled precision. By utilizing this new technology to optimize the performance of the action, we have created a product which leaves the pianist in total control of dynamic response, timbre and touch. This libray provides the greatest possible control during the softest pianissimo, through crescendos to reserves of power needed for the loudest fortissimo.

Mathematician, scientist and inventor Wayne Stahnke became fascinated with the idea of designing his own reproducing piano when he visited Disneyland at the age of thirteen. “They had a player piano—and it was playing all those notes, with perfect accuracy, and amazing rapidity,” he said. “And something clicked in my brain.” It was to be an enduring fascination. After earning a degree in electrical engineering from U.C. Berkeley, and enjoying a successful career as an aerospace designer, Stahnke returned to his dream of designing and building a reproducing piano. “I wanted to build one that would record and play in a way that would satisfy the finest musicians,” he said. His technology took more than a decade to evolve into reproducing concert grand pianos.

Kontakt, (full version, it will open in the free player, but in a time limited/session mode)


Your Review: Note: HTML is not translated!